Setting up an apartment routing cabinet

I've been working on setting up a routing cabinet. I'm not buying anything new so if I don't have something, I have to be a little creative. Its in the kitchen, inside the wood cabinets that you usually would put dishes, pots and pans. I had to drill a 1-1/4" hole in the bottom to run a power cable that leads to a power outlet strip, and also I can run a couple of ethernet cables through there as well.

I do not have a layer2 switch at the moment so I had to learn again the color codes for ethernet cross over cables. It took me 2 extra ends but it was kinda fun after I got into it. I'll have to make more later.

This things got a long way to go, but the router which is a breadbox linux router/wirelessAP/samba/printer/scanner server, has been running over at a friend of mines house for about 3 weeks. They started to depend on the file server, and sometimes used it for printing. The scanner is running local mode, and I need to test it in network mode from this Mac.

Here's a picture, Its messy, because the cabling is not fully finished. The can with no label is a Cantenna that should be able 12dbi range that I made a little while back. That might be used to pick up a backup wireless :) But the main internet uses Clearwire, which is a WiMAX protocol, city wide wifi. 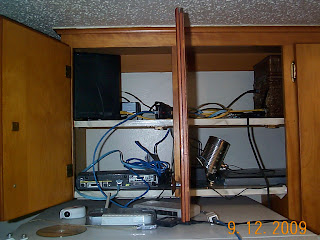